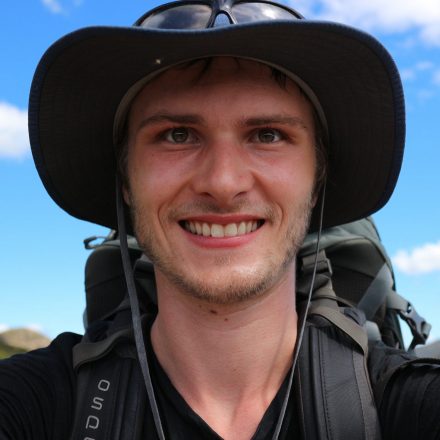 Nic graduated with his Honours in global sea level rise in 2016 at the University of Tasmania. He has a background in geology, biology and climate science.

Nic has a background in geology, biology and climate science. He has also worked as a hiking guide on Tasmania's Overland Track sharing his passion for nature and science. Nic now studies the abundance and variability of phytoplankton in the equatorial Pacific ocean. This region is the largest oceanic source of Carbon Dioxide into the atmosphere, driven by upwelling which also brings nutrients to the surface, allowing these small plants to grow. The Pacific ocean has some of the largest modes of natural variability in the world (El Nino & Pacific Decadal Oscillation) which have large and varied impacts on nutrient upwelling, driving changes to the abundance and distribution of phytoplankton which can influence global food-webs and climate.

The tropical Pacific ocean spans one third of earths circumference, composes 18% of the oceanic ecosystem and is the origin of the most globally influential mode of climate variability; El Niño-Southern Oscillation (ENSO) (Strutton, Evans, and Chavez 2008). The tropical Pacific ocean is a dynamic region essential in the global carbon cycle, being the largest ocean-to-atmosphere source of Carbon Dioxide (CO2) in the world, varying inter-annually depending on ENSO phase and other modes of large-scale climate variability (Chavez et al. 1999). This perturbation on the biogeochemical cycle forces changes in biological productivity and ecosystem dynamics in the equatorial Pacific with influence and teleconnections around the globe. Since tropical oceans are typically nutrient limited (oligotrophic), rather than light limited, changes in biological productivity associated with ENSO are due to alterations in surface ocean nutrient supplies from equatorial upwelling (Gierach et al. 2012). Phytoplankton are the primary ocean photosynthesisers and support the ocean food web. Since the oceans are so expansive, understanding the temporal and spatial variations of ocean photosynthesis is essential for understanding the biological pump of air-sea CO2 fluxes, carbon fixation, vertical export and variability we will see in a changing climate.