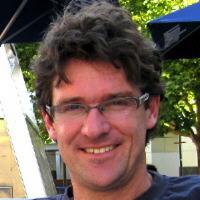 Professor Andy Hogg completed his undergraduate degree in physics at the Australian National University in 1996 and was awarded his PhD in Geophysical Fluid Dynamics from the University of Western Australia in 2002. He then spent three years as a postdoctoral fellow at the Southampton Oceanography Centre, where he developed a new, high-resolution coupled ocean-atmosphere model. In 2004 he returned to ANU to take up a position as an ARC postdoctoral fellow. He is currently based at ANU’s Research School of Earth Sciences. Prof Hogg’s research interests centre on physical processes governing the ocean and climate. His work within the ARC Centre of Excellence for Climate Extremes is focused on understanding ocean-atmosphere interactions in the Southern Ocean and particularly the exchange of heat, momentum and carbon between different components of the climate system. He will play a key role in developing tools to understand the climate system at progressively finer scales. Due to Prof Hogg’s unique contributions to understanding of the Southern Ocean, he was awarded the Frederick White Prize from the Australian Academy of Science in 2012, the Nicholas P. Fofonoff Award from the American Meteorological Society and the AMOS Priestly Award in 2015.