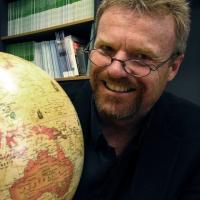 Professor Neil Holbrook completed his Bachelor of Science (Hons) in applied mathematics and physical oceanography at the University of Sydney, in 1990. He was awarded his PhD in applied mathematics/physical oceanography, also at the University of Sydney, in 1995. He is one of Australia’s original National Greenhouse Advisory Committee PhD scholars. Following a brief postdoctoral fellowship at Macquarie University, in the Climatic Impacts Centre, Prof Holbrook was appointed a lecturer in atmospheric science at Macquarie University, in 1996. In 2008, he commenced at the University of Tasmania as an associate professor in climatology and climate change. He was promoted to Professor of Ocean and Climate Dynamics in 2018 and is currently head of the Centre for Oceans and Cryosphere within the Institute for Marine and Antarctic Studies at UTAS. Prof Holbrook uses his expertise in ocean and climate dynamics on sub-seasonal to multi-centennial time scales to better diagnose the important mechanisms underpinning climate variability and extremes as well as climate change. His current research focuses on understanding the causes and predictability of marine heatwaves, based on the analysis of observations and a hierarchy of model complexities and experiments. He has published extensively in the international literature on the ocean’s role in climate, climate variability, climate extremes and climate change. Prof Holbrook is an elected fellow of the Australian Meteorological and Oceanographic Society and an associate editor of the Journal of Southern Hemisphere Earth Systems Science. He has previously served as president of the International Commission on Climate of the International Association of Meteorological and Atmospheric Sciences/International Union of Geodesy and Geophysics (2011-2019). He was an associate editor of the Journal of Climate (2006-2008), and he led Australia’s National Climate Change Adaptation Research Network for Marine Biodiversity and Resources (2009-2013).