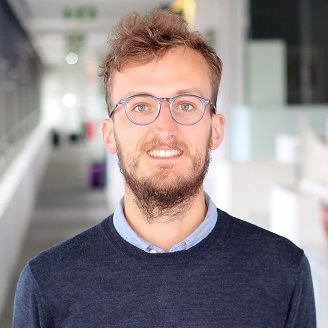 Jake received his bachelor's degree in Geosciences at the University of Freiburg, Germany, in 2015. He then studied Arctic Geology at the University of Tromsø (UiT) and the University Centre in Svalbard (UNIS) for a year and worked as an intern at the Alfred Wegener Institute, Helmholtz Centre for Polar and Marine Research in Bremerhaven, Germany. In 2019, Jake graduated from Utrecht University in the Netherlands with a master's degree in Marine Sciences. He wrote his two master's theses ("Sedimentological reconstruction of Quarternary Antarctic Bottom Water flow velocities in the Pacific Southern Ocean" & "230Th-normalised modern dust fluxes in the southern Indian Ocean and the Tasman Sea") at the Alfred Wegener Institute and the Institute for Marine and Antarctic Studies (IMAS) in Hobart, Australia, respectively. In March 2020 Jake started his PhD at IMAS (University of Tasmania), investigating the response of phytoplankton to dust in the Southern Ocean. He is working in the field of ocean biogeochemistry and nutrient cycling using satellite and BGC Argo data.

THESIS: Dust in the Southern Ocean - Does it really increase productivity?

My PhD aims to investigate the biological response of phytoplankton to increased dust deposition in iron-limited marine environments. The Southern Ocean is one of the largest iron-depleted regions on the planet and relies heavily on dust aerosols from the Australian mainland to satisfy its high demand for iron and allow for phytoplankton to reproduce. Severe droughts and extended summer seasons are conducive to dust production in the Australian deserts and supply thereof to the EAC and Pacific Southern Ocean. Similarly, wildfire aerosols are believed to supply valuable nutrients to the oceans, additionally boosting the productivity of phytoplankton communities. With increasingly extreme climate conditions, scenarios like heatwaves, droughts, and wildfires will likely occur more frequently in the future. Understanding the biological response of phytoplankton to increased levels of atmospheric aerosols associated with these scenarios will help to elucidate the evolving part the Southern Ocean takes in oceanic carbon uptake and storage.