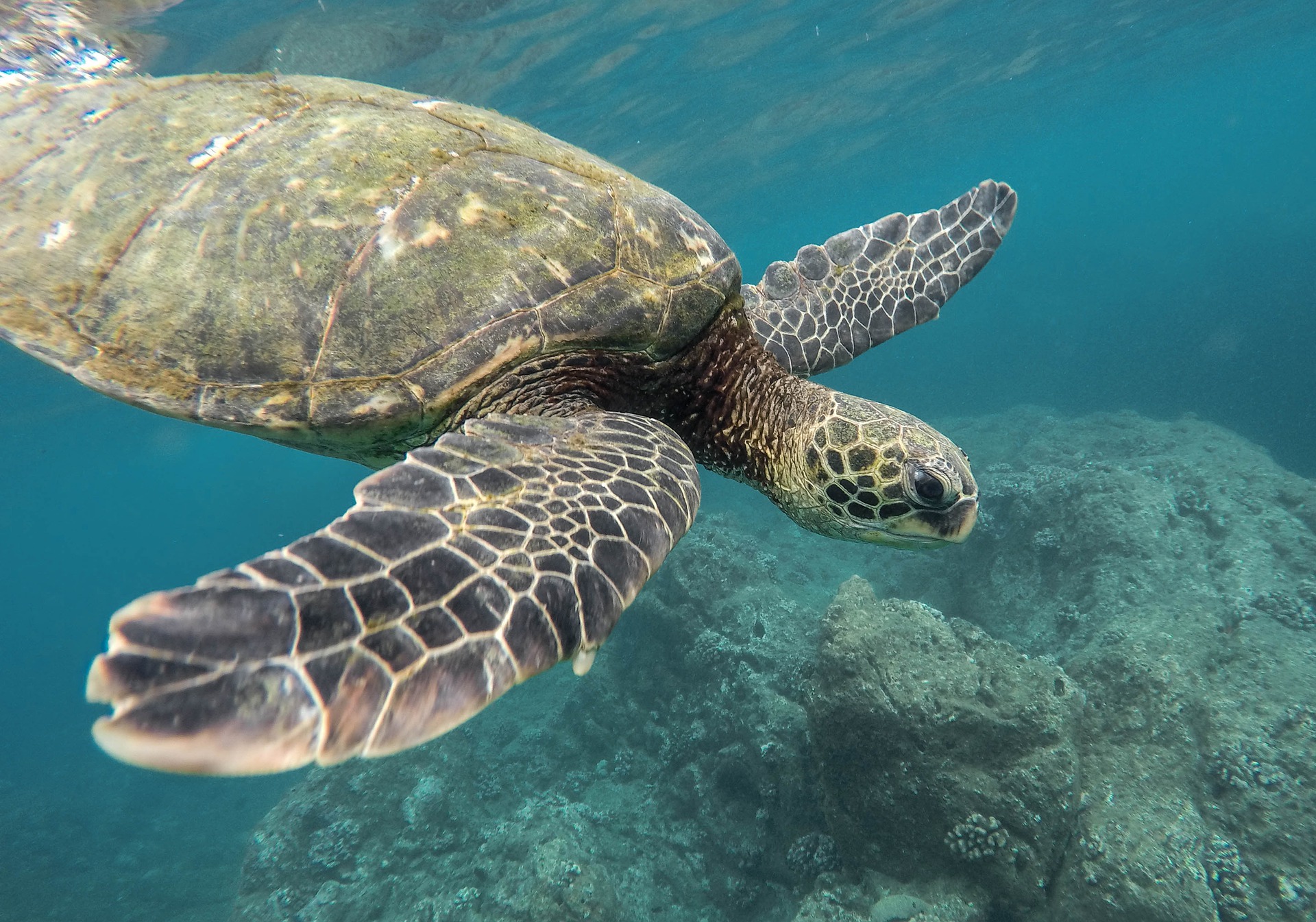 To rescue a turtle, University of the Sunshine Coast PhD candidate Caitlin Smith half-swam, half-crawled across mud on an inner tube. She tied a harness around its chest and front flippers, so the rest of the team could carefully pull it to safety. It was just one of 15 sick green turtles our team discovered in recent weeks in the Great Sandy Strait near Queensland’s Hervey Bay.

They’re starving. Huge rains and floods have washed large quantities of sediment out to sea, where it smothers the seagrass these marine creatures rely on. There’s no relief in sight, as we enter our third wet year of La Niña.

Why is this happening?

Most of the sick sea turtles we found – as well as those found by Queensland’s Department of Environment and Science team – showed signs of starvation and illness, including the newly identified soft shell disease.

What lies behind these deaths are the rains and floods brought by La Nina.

Like much of New South Wales and Queensland, the Great Sandy Strait has been heavily hit by flooding this year, with three major floods engorging the Mary River. Floodwaters have carried huge amounts of sediment into Hervey Bay, reducing the water quality and flushing pollutants into sea turtle and dugong habitat.

In normal years, sediment from rivers brings a flush of nutrients, which can actually cause a seagrass boom once the water quality improves. The problem is, there’s been just too much sediment. With one La Niña after another, it’s been harder for seagrass to recover or regrow.

As sediment from the floods spread out over the shallow seas, it made the water murkier. Soon, sunlight couldn’t penetrate the gloom to reach the seagrass meadows. Worse, floods release a cocktail of chemicals, including pesticides and herbicides, unintentionally washed down from farms and inundated townships.

The result has been widespread devastation in the Great Sandy Straits region. In May this year, a James Cook University team surveyed 2,300 square kilometres across the region and found almost no seagrass left in waters ranging from 1 metre to 17 metres.

Green sea turtles and dugongs are the grazers of the Australian seas and rely heavily on seagrass. In good years, they drift over these lush meadows of seagrass – which resemble grassy fields on land – eating as they go.

Summers are when our seagrass meadows usually flourish, letting turtles and dugong fatten up for the winter. During winter, seagrass naturally dies back. This year, local sea turtles and dugongs went into winter in poor condition, having missed out on fattening up during the summer season.

That’s why we’re seeing so many sick or dying animals. From January 1 to August 31 this year, volunteers from Turtles in Trouble Rescue have taken 91 sea turtles from the region to the nearest wildlife hospital, 300 kilometres away. By contrast, in 2019, before the La Niña cycle began, the group had only 12 transports.

Is there nowhere else they can get food from?

In flood-affected areas, turtles and dugongs have only two choices: move away, or try eating something else.

During the large 2010 floods, dugongs from Hervey Bay were found more than 200 kilometres south in Moreton Bay, offshore from Brisbane. Unfortunately, their migration didn’t leave them much better off – the seagrass in Moreton Bay had been hit by Brisbane River sediment. But we do know some survived.

Others were found dead, washed up 900 kilometres south after trying to find food and failing. Turtles can migrate too, but they’re often so weak from starvation that disease and parasites that they die before finding an alternative food source.

What about finding something else to eat? When our team analysed the stomachs of dead sea turtles from the Hervey Bay region, we found many were full of mangrove leaves.

Unfortunately, these trees have a range of natural toxins designed to stop animals eating them, such as the toxic sap of the milky mangrove. Worse, as the “kidneys of the coast”, mangroves use their leaves to store concentrated salt and toxins such as heavy metals. In short, this diet is no substitute.

Is this part of a natural cycle of boom and bust?

While turtles and dugongs do have natural variation in their populations over time – and often due to food availability – there are limits. Turtles and dugongs cannot respond to climate-induced pressures the same way fast-breeding mice can.

Female green sea turtles have to be 30 to 40 years old before they can begin to reproduce. They only undertake their long migrations to breed every three to eight years. They lay over 1,000 eggs in the hope just one hatchling will survive the perilous seas long enough to hit reproductive age.

Dugongs, meanwhile, only raise a single calf every three to seven years. These reproductive strategies make it very difficult to respond to fast changes to their environments.

Successive lean years caused by back-to-back La Niña events will hit both the survival rate and reproductive ability of these animals.

Sea turtles in poor condition will not be able to migrate successfully, which means they’re heading for a poor nesting season. Dugongs, too, will struggle. Without stores of fat, the females won’t be able to support their calves through to weaning stage. That will make it harder to replenish the population and recover from losses from starvation or relocation. We won’t know the full impact of this event until years from now.

In response to the crisis, local volunteers have stepped up. The Turtles in Trouble Rescue group has gone from five to 50 trained members, and are working with the University of the Sunshine Coast to create a sea turtle rehabilitation centre in the area. We’ll be better prepared for the next flooding event.