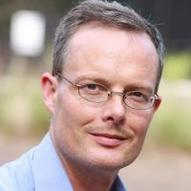 Professor Andy Pitman was born in Bristol and was awarded a bachelor’s degree with honours in physical geography and a PhD in Atmospheric Science by the University of Liverpool, UK. He also holds a Postgraduate Certificate in Educational Leadership from Macquarie University. He has been at the University of New South Wales since 2007. He was the Director of the ARC Centre of Excellence for Climate System Science (2011-2017) and is the Director of the ARC Centre of Excellence for Climate Extremes. Prof Pitman’s research focus is on terrestrial processes in global and regional climate modelling, model evaluation and earth systems approaches to understanding climate change. His leadership, collaboration and research experience is extensive both nationally and internationally. Between 2004 and 2010 he convened the ARC Research Network for Earth System Science, which facilitated interaction between individuals and groups involved in climate system science. He is a member of the Australian Community Climate and Earth System Simulator initiative, the Academy of Science’s National Committee for Earth System Science, and the NSW Minister for Climate Change’s Science Advisory Committee. He is also heavily engaged in e-research, including most recently on the taskforce assessing the roadmap for national research infrastructure. Internationally, Prof Pitman is closely affiliated with the World Climate Research Programme (WCRP). He was a long term member and former chair of the WCRP’s Land Committee for the Global Land Atmosphere System Study. As Co-chair, he jointly led one of the first major international intercomparison exercises: the Project for the Intercomparison of Land Surface Parameterization Schemes, which is supported by WCRP and the International Geosphere Biosphere Programme. He also sat on the Science Steering Committee of the Integrated Land Ecosystem-Atmosphere Processes Study and is currently co-coordinator of the Land Use Change: identification of Robust Impacts project. Prof Pitman is a regular invitee for keynote presentations and is a passionate communicator about science, contributing regularly to the media on the science of climate change. He was a Lead Author for Intergovernmental Panel on Climate Change (IPCC) Assessment Reports 3 and 4, contributing to the award of the Nobel Peace Prize to the IPCC in 2007. He was Review Editor of the 2013 IPCC report. He has also contributed to the Copenhagen Diagnosis, an Australia-led update of the science of climate change. He has held editorial positions with the Journal of Climate and the Annals of the Association of American Geographers’ Journal of Geophysical Research-Atmospheres and is currently an associate editor for the International Journal of Climatology. Awards and accolades received by Prof Pitman include: NSW Scientist of the Year Award (2010), the Australian Meteorological and Oceanographical Medal (2009), the Dean’s Award for Science Leadership at Macquarie University (2005), the Priestly Medal for Excellence in Atmospheric Science Research (2004) and the Geoff Conolly Memorial Award (2004). He jointly won the International Justice Prize for the Copenhagen Diagnosis (2010) and was among Sydney Magazine’s list of the 100 most influential people (2010). He is a Fellow of the Australian Meteorological and Oceanographical Society and of the American Meteorological Society. Prof Pitman has a long track record of nurturing early career researchers and has supervised multiple PhD students through to successful completion. He has published over 200 papers in peer-reviewed journals and has authored 20 book chapters.