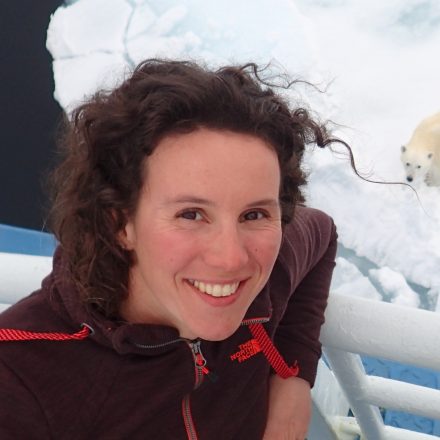 Institute of Marine and Antarctic Studies (IMAS)
University of Tasmania

Originally born in France, Amelie completed an undergraduate and masters in oceanography at the National Oceanography Centre in Southampton (U.K.), working with ocean observations from the Greenland region. Amelie graduated in 2014 with a PhD in Physical Oceanography at the University of Tasmania (Australia). Collaborating with CSIRO, her work focused on circulation, mixing, and internal waves in the Southern Ocean. Amelie Meyer worked as a Postdoctoral Fellow at the Norwegian Polar Institute in Tromsø (Norway) from 2014, where she worked on ocean-ice interactions in the changing Arctic. She was hired for a 6-month long Arctic sea ice drift that took place in 2015 (N-ICE2015 expedition). Amelie joined the ARC Centre of Excellence for Climate Extremes in May 2018, to investigate the impact of climate change on Southern Ocean circulation. Amelie is passionate about polar science, climate variability, ocean circulation, and mixing processes. She has spent over 180 days in polar and subpolar regions on the ocean and sea-ice to collect data. Amelie is a strong advocate for science communication and outreach and has co-supervised the social media initiative @oceanseaicenpi since 2014.