Scott Power: The benefits and limitations of reducing emissions

Scott Power: The benefits and limitations of reducing emissions

Scott Power (Bureau of Meteorology).  The rate at which we’ll experience unprecedented high temperatures over coming decades: benefits and limitations of reducing emissions 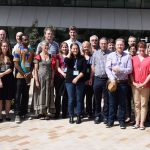 March 18, 2019 9:27 am Published by Climate Extremes Comments Off on Workshop: The science of multi-year drought in Australia

A successful workshop on the science of multi-year drought was recently held at Monash University in Melbourne, where 50 experts from Australia, and small number of experts from the UK and the US, met to discuss what we know about the science of these droughts in Australia.

Webinar: The impact of El Niño-Southern Oscillation (ENSO) on rainfall in a warming world

Scott Power (Bureau of Meteorology) Overview Rainfall variability in the tropical Pacific caused by El Niño-Southern Oscillation (ENSO) is a major driver of climatic variability in Australia, as well as Asia, North and South America, Africa and over islands throughout the Indo-Pacific. Disruptions to rainfall patterns and intensity over the Pacific Ocean drives droughts, floods and changes severe weather that have major impacts on safety, health, livelihoods and ecosystems. It is therefore important to know how ENSO and the rainfall... View Article